Use of Force Scrutiny September 2018

I am pleased to announce that my office has successfully undertaken its first scrutiny deep dive review, which sought to provide assurance on how legitimately Dyfed-Powys Police officers utilise their powers of force on members of the public.
I have been encouraged by the Force’s response to my office undertaking this work, and thank all those who contributed honestly and thoroughly to the review. I would also like to thank the members of the public who were willing to share their views with us, through my online survey and in person at the various events my team and I have attended over the summer months.
I found that public feedback was mainly positive in relation to the police’s use of force. This was supported by my Panel of independent volunteers, who found that officers dealt with the public proportionately and reasonably in the incidents they reviewed.
It was not surprising to hear that alcohol, drugs and mental health were recorded as the most prevalent impact factors affecting the police’s tactics.
Unarmed skills, such as pressure points and take-downs, handcuffing and ground restraints were the most common tactics leading to complaints of excessive force; although the vast majority of these were not upheld.
Whilst nothing of significant concern was found within the review, I was disappointed to find that the use of force is being under-recorded by officers. Shortcomings in the accurate collection, collation and analysis of data has not allowed me to provide full assurance that force is consistently and proportionately used by officers. As such, I have made a series of recommendations to the Chief Constable, which I am confident he and his team will progress. I will be reviewing this progress over the coming months and will endeavour to keep you updated through my public meetings and website.
I am committed to continuing this approach and will be looking for your support in informing my staff how you, the residents of Dyfed-Powys, feel your police service are supporting you to stay safe and free from crime. I urge you to participate in my future engagements and consultations, details of which can be found on my website, or by contacting my office. Thank you. 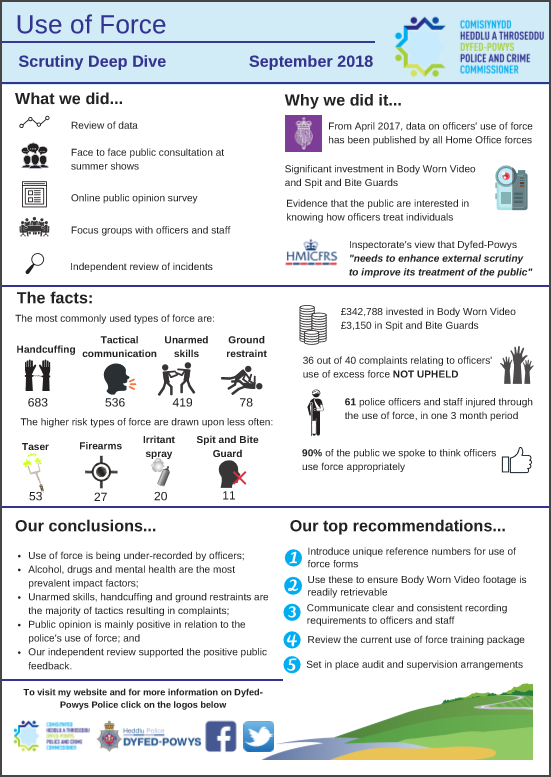 Use of Force Summary

Use of Force Report