On Tuesday 19th January 2021, Police and Crime Commissioner Dafydd Llywelyn will hold a virtual community engagement day that will specifically focus on Road Safety, where Dyfed-Powys Police will launch the All Wales Fatal 5 Campaign.

Dyfed-Powys Police are leading on the Fatal 5 campaign, which focuses on the five strands that relate to the most significant collision factors in fatal and serious injury collisions, which are drink/drug driving; speeding; not wearing a seatbelt; using a mobile phone; careless driving.

The Campaign will be launched by PCC Dafydd Llywelyn live on Facebook, during his first Commissioner in Conversation live broadcast of the year on Tuesday January 19th where he will be joined by ACC Mark Travis from South Wales Police, who is the Strategic Lead for Roads Policing in Wales, and Teresa Ciano, GoSafe Partnership Manager.

The Fatal 5 Campaign aims to raise awareness of the Fatal 5 strands to the general driving public, educating drivers in relation to the five strands, enforce compliance of road traffic regulations, drawing media attention to the subject and as a result, reducing the number of people killed or seriously injured on our roads.

Police and Crime Commissioner, Dafydd Llywelyn said; “In 2019, 1,193 people were killed or seriously injured in collisions on the road network in Wales - this is a casualty rate that should not be accepted and I am committed to ensuring we identify ways of reducing these statistics and the associated terrible human cost. I am determined to work with colleagues from all four Police Forces in Wales as well as key partners such as GoSafe to achieve a correct blend of education, enforcement, and campaigns to make our roads safer.

“I’m looking forward to launch the Fatal 5 campaign on Tuesday during my virtual community campaign. The Fatal fives strands, which include, speeding, using a mobile phone, not wearing a seatbelt, driving without due care and driving under the influence of alcohol or drugs can all lead to devastating consequences; not only on those involved in the collision, but also on the wider circle of family and friends. I hope that through campaigns such as Fatal 5, we can work together to raise awareness of key issues and ensure our roads become safer”.

GoSafe Partnership Manager Teresa Ciano said, “The Fatal Five are the main contributors to fatal road collisions on the roads of Wales. In collaboration with our partners including the Fire and Rescue Service and Local Authorities we run various campaigns throughout the year raising awareness of how all road users can play their part in making Welsh roads safer if they do the little things to reduce these risk.

“By engaging with road users at events, promoting these core safety messages over social media and in advertising campaigns and through joint operations with our various partners and colleagues, the Fatal Five Campaign is never far from the core of what we do.

“GoSafe’s strategic aim is to make Welsh roads safer and to reduce injuries and fatalities on the roads of Wales. By supporting the Fatal Five Campaign, and raising awareness of how a change in behaviour and attitude can lead to a safer journey for all road users, our aim is to encourage more motorists, of all ages, to make the safe choice and help make our roads safer for everyone.”

Strategic Lead for Roads Policing in Wales, ACC Mark Travis of South Wales Police said “I am committed to improving road safety and promoting safer driving not only within my Force area in South Wales, but also on a National level across Wales and beyond, and I encourage people to get involved in the Fatal 5 Campaign that we are launching to help promote the key messages.

“Each one of the five strands of this campaign on their own has the potential to be a contributory factor in somebody being killed or seriously injured. Importantly they are also behaviours that road users can be directly responsible for and control.”

“Keeping people safe on our roads is an issue that everyone can be involved in. Individuals, families, friends and communities all have a role to play in helping to promote safer driving in our country, and I hope people will support the campaign and work with us to promote the key messages within local communities.

“It is only by working together that we can promote safer driving in Wales, improve road safety and ultimately, help save lives.”

During his virtual Community Engagement Day, PCC Dafydd Llywelyn will also meet with community representatives in Powys, to discuss road safety matters in some areas within the county before launching the Fatal 5 Campaign on the Office of Dyfed-Powys Police and Crime Commissioner’s Facebook page – www.facebook.com/DPOPCC - at 5:00pm. 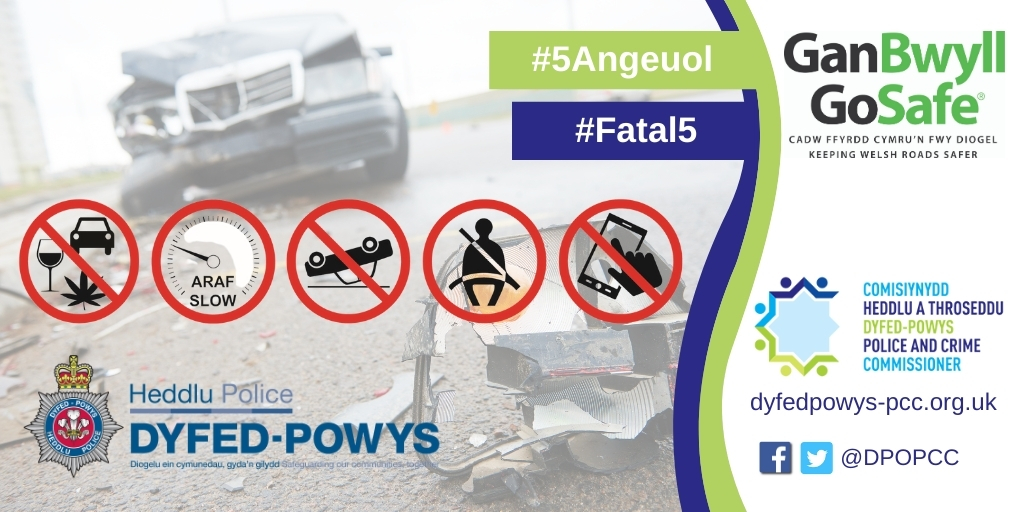