Police and Crime Commissioner Dafydd Llywelyn has put pen to paper on a three year deal with Swansea City AFC Foundation, and awarded a grant of £300,000 to the Foundation’s Premier League Kicks programme to roll out free weekly football sessions to children and young people in five areas across the Dyfed-Powys Force area over the next three years.

The aim of the PL Kicks programme is to use football and sport in general to inspire children and young people, and bring communities together.

Over the last year, Swansea City AFC Foundation have been running sessions in two areas within the Force area, in Seaside Llanelli, and Pembroke Dock, with hundreds of children and young people turning out on a weekly basis, as a part of a pilot scheme funded by the Police and Crime Commissioner.

Following their success in both areas, the programme will now be extended for another three years in Seaside Llanelli and Pembroke Dock under the new agreement announced, and also introduced in to children and young people in three new areas, in Aberystwyth, Newtown, and Carmarthen.

Police and Crime Commissioner Dafydd Llywelyn said; “It has been a privilege over the last year to see first-hand, the impact the PL Kicks scheme is having on children and young people in Seaside Llanelli and Pembroke Dock. As a sports enthusiast, I am fully aware of the influence that sport and exercise have on the health and wellbeing of individuals and communities in general.

“PCSOs from local Neighbourhood Police Teams have also been attending the weekly sessions under the pilot scheme, with the aim of developing a positive relationship between the Police and young people.  I now look forward to see the roll out of the scheme to the three new areas, and to see the positive impact they will have on children and young people of the areas”.

Youth Engagement Manager Craig Richards said: The Swans Kicks Project in partnership with the Dyfed Powys Police and Crime Commissioner offers young people opportunities and a sense of belonging. It has been a difficult 18 months for everyone. However, we believe these sessions will have a positive influence on young people to build stronger communities to reduce and prevent crime. We are excited to be able to offer football sessions to all areas in Dyfed Powys and thank the Police Crime Commissioner for his full support towards the programme

First Sessions will take place on the following dates: - 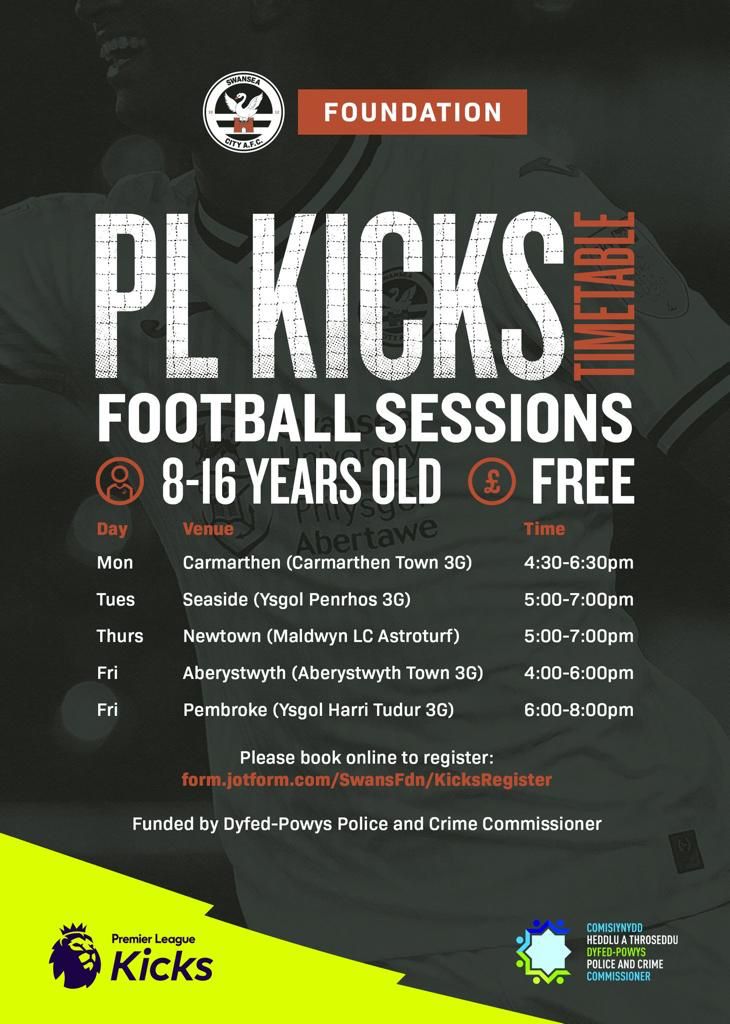