Dyfed-Powys Police and Crime Commissioner Dafydd Llywelyn has voiced his desire for the uplift of police officers in the force to truly reflect and support the communities they will serve.

Prime Minister Boris Johnson has announced the recruitment of 20,000 new police officers over the next three years.

The number of new officers for Pembrokeshire, Carmarthenshire, Ceredigion and Powys is yet to be announced, but Dafydd Llywelyn is already very clear on what he expects from the uplift in officers.

He wants officers to be recruited from within the force area wherever possible, to reflect the communities they serve and to be allocated to positions where there is the most police demand, which would include frontline and specialist roles.

Police and Crime Commissioner Dafydd Llywelyn said: “As we wait for Central Government’s announcement of how many police officers we will be able to recruit in Dyfed-Powys, I am using the time to discuss with Chief Constable Mark Collins where the new recruits would be of most benefit in achieving safe, secure and resilient communities.

“Policing has changed over the years, as have our communities, so careful consideration needs to be given to where new recruits would be best placed to have the best impact on making our communities safer. We must look at policing demands and ensure we include specialist roles that will help to prevent crime from occurring, as well as bolster the frontline to react and support communities as incidents happen.

“I would like to see a dedicated PC and team in every town centre similar to that in Llanelli and this would fall neatly in line with the newly installed CCTV infrastructure that I commissioned.

“I will also work to ensure Dyfed-Powys Police makes every effort to recruit from our diverse communities so that the force make-up is an accurate reflection of our society.

“I am continuing to engage with the community to understand their views on this issue also.”

Dyfed-Powys Police is planning to go out for advert for police officers in January 2020.

CAPTION: PCSO Scott Jones (a member of the Llanelli Town Centre team) and Police and Crime Commissioner Dafydd Llywelyn at the site of one of the new CCTV cameras in Llanelli. 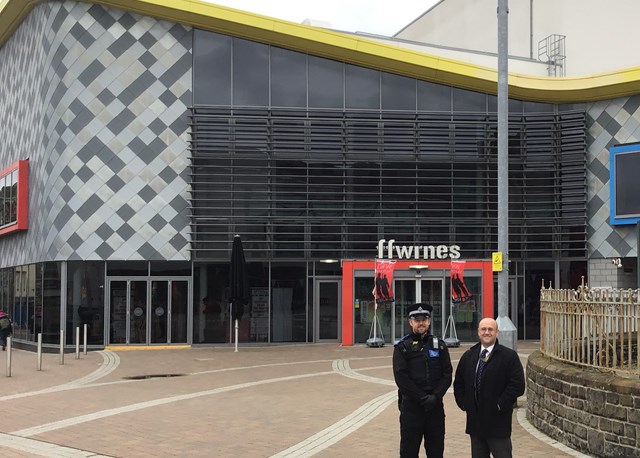